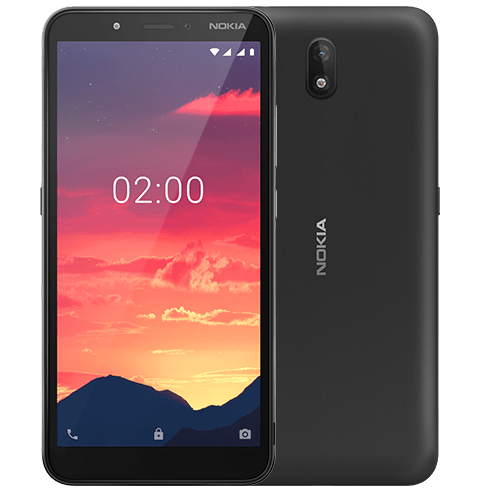 Be the first to review this product
As low as ₦29,999.00
In stock
SKU
1817
Details
Specifications
Reviews

Nokia C2 is an entry-level device that is meant for people on a budget. It shouldn’t be a smartphone you should get for smooth multitasking or a powerful game play. This is a good smartphone for your younger siblings or a backup smartphone.

It runs on Android 9 Pie Go Edition with an eMMC 5.1 storage of 16-giga byte of ROM and 1-giga byte of RAM. There is a micro SD card slot where you can extend the storage up to 64-giga byte. Camera wise, it comes with a single 5MP rear camera with f/2.2 aperture.

On the front, it also comes with the same 5-mega pixels camera with f/2.2 aperture. There is a single led flash at the rear of the device, likewise the front camera. It records video in 720P at 30fps. What is keeping the light on is a 2,800mAh battery which doesn’t support fast charging.

The trend Nokia has adopted is including the previous version of Android on its budget phones. For this reason we see Nokia C2 come running Android 9 Pie (Go edition). Android Go Edition is a tailored stock Android distribution designed for low-end smartphones. It first made available for Android Oreo. I think whoever buys this one should be okay with the fact that Android 10 might never come to it. Unless of course and Android 10 Go Edition is released in time. But as it is, Nokia C2 comes running Android 9.0 Pie (Go edition) from its box. With it you can access YouTube Go, Google Maps Go and millions of other helpful apps on the Google Play Store.

More space for your stuff

Nokia C2 has 16GB eMMC 5.1 of internal storage and runs on 1GB of RAM. This phone allows you to add more storage space for your files using a micro SDXC. It comes with a dedicated slot for this feature. This means you will not have to sacrifice on SIM slot to create room for the micro SD card. Speaking of SIMS, Nokia C2 supports 4G network and you get to choose between a Single SIM (Nano-SIM) or Dual SIM (Nano-SIM, dual stand-by) version.

They say, in all things, effort should be appreciated. And Nokia C1, however low-end reviewers want it to look is quite a decent phone. It has a 5 MP, f/2.2 primary camera with auto focus. And the selfie camera of Nokia C2 is 5 MP. This phone captures bold and bright HDR photos. It is also capable of recording 720p@30fps videos with either camera lenses. Of course the images here will not the best pictures in the world. But you will surely appreciate the quality this phone produces especially in proper lighting. However, it is necessary we note that these are the same cameras Nokia C1 offers.

Nokia C2 has a removable 2800 mAh battery that goes a long way. You should be able to go from from sunrise to sunset with much ease with it. Also, depending on your usage, 2-3 days of battery life won’t seem far-fetched.